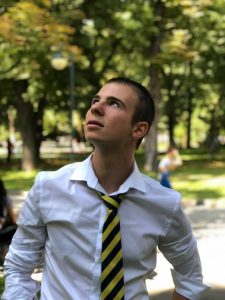 My Erasmus Experience in Marmaris

Hello, dear reader! Welcome aboard. Make yourself comfortable because the cruise begins its journey in a few minutes. In the meantime, let me tell you what this trip will be about. If you are expecting a high school style essay, I am sorry to disappoint you, but you bought a ticket for a wrong ship. This excursion is all about real friends, love, happiness and what life is about. Sounds fascinating, right? But wait a minute… what does all of this have to do with Erasmus? A really a good question my dear reader. Let us find out together. The anchors are being raised. The journey has just begun!

Firstly, let me tell you some boring facts about me. My name is Ivan. 18 years old. Senior year in High School. Bulgarian.

Okay, so how I came across Erasmus+. Well, I was partying while a friend of mine called me and offered me to go with him to Marmaris in Erasmus+ projects. I’ve already known a lot of people who have been in such projects and had a great experience and made new friends, anyway I said “no, no it’s too soon”, but he answered “Okay, i have already applied on behalf of your name” So I basically had no choice :)). I consulted some friends who were to “Erasmus+” and everyone was so happy about me saying that this is a great opportunity I shouldn’t miss. So the next day I was firmly convinced to go there and have great time. I acted immediately, got my tickets and passport in three days and here I am, Friday 26th of September-travelling to Marmaris. First by bus to Istanbul and then by flight to Dalaman and then another bus to Marmaris.

The travelling itself was pleasant as the bus driver was telling us stories about some of the Turkish cities we were passing by. He told us about Edirne and suggested cheap places to buy Turkish delights. With him we made a stop in Istanbul and had a walk in the city. There we saw Hagia Sophia, the two obelisk- one was a gift from Cleopatra. There we ate traditional Turkish food and what made me good impression is that all Turkish are very kind and ready to help you. We spent some time there and then continued our trip to Marmaris.

The hotel itself was incredible there were two buildings one for rest and the other one-where the party was. There were 2 pools as well. In the calm building the pool was brutal and there were some specific beach beds to sunbathe where we laid together four, five people next to each other :)). The beach was 5 minute away from the hotel. And after lunch between the two sessions everyone could go either to the beach or to the pool or to go to both of them if there was enough time:)) which wasn’t. Anyway each night we were going to the beach drinking beers, playing games, doing stupid things, just living the best of our life!

In Marmaris everything was amazing just as one could dream to be. I mean everyday was so freaking nice. In general we had two sessions for about two and half hours each every day. One in the morning and one in the afternoon. There was a 15 to 30 minutes coffee break during the session. Then we were going outside and had great talks. In sessions we made discussions about stereotypes, about media literacy, about COVID-19. Each session started with a short, funny energiser that boosted up your mood. Each of the countries had to represent a workshop. Two countries in the morning session for three days. There we learned new interesting methods to solve problems like “The problem tree” and the German game with “6 hats” when you pick a hat and u can be only emotional or only positive or only informed. After dinner there were cultural nights when each country could represent the typical cultural food and drinks, tell some interesting facts and what it is famous for. There we represented the Bulgarian Rakiq, kashkaval which is like cheese, and the traditional lutenitsa that is made of tomatoes, peppers and other veggies. I personally really likes the Spanish wine, which they mixed with cola and was really tasty. We also played traditional music, learned new dances- I remember a Portuguese one-so vivid, I was watching them when Eloisa took my hand and..we were dancing :)), also Byala Roza folklore dance- a Bulgarian one, I personally played it :)). So there was a great fun. There were only happy faces.

After all what was the most important in the project were the people. So funny, intelligent guys. So open-minded and kind. You are watching them, the way they speak, their manners and jokes and you are like ”Loool, this is not happening in my life” you are like “cmon I’m in love with these guys and want to stay here forever”.

They did teach me life and what is more is that at the same time we drank beers and had so much fun. It is not necessary to mention that I brushed up my English knowledge a lot. I mean I even started to think in English and back to my country it was strange not to listen English speech. I became so attached to these people for only a week, I cried so much after the project, Also the night before we left, the Portuguese team left and we were on the beach singing sad songs crying all, being hugged in a circle. That are emotions that make life meaningful. Another scenario. The last night I went to my room for something like 10 minutes and when i came back there was Carme who asked “Do you find something strange in me” I smiled and said “No,Why?” Then she explained that she was crying because she thought I left without saying goodbye. Imagine how I felt. I was the happiest person in the world. I felt loved. Stepped to her, hugged her up and I started crying with the most delightful face and smile in the world. Just a little pause, dear reader, feel it:)

So that is what Life is. It is not about stupid everyday stuff.

And then came the time for us to leave. The same procedure with bus-plane-bus back to my country-Bulgaria

Oh, I’m afraid we have reached land again. The cruise is over. I hope you enjoyed it. I sure did. I don’t like good-byes. I am certain that this was the best week in my life. And I’m firmly decided to go to Erasmus+ again. This period of time will forever be a special one for me and so… until the next time. Dovizhdane (goodbye)!