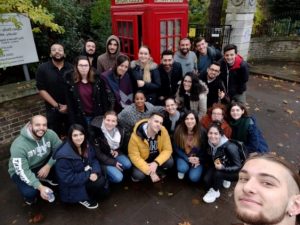 Counter and alternative narratives against Islamophobia

A training course on Counter and alternative narratives against Islamophobia was held in London from 13-22 November 2019. It was attended by young people from Bulgaria, Croatia, Greece, Germany, Italy, England and Turkey. The main topics addressed, were related to the spread of Islamophobia in Europe and radicalism among young people, as well as techniques for dealing with Hate speech. Each country was also required to produce a report where to present the state of these problems in its local communities and to present it to the participants involved. After the extremely fruitful discussions that took place during the project, the participants also developed many alternatives to combat “Hate speech” following the suggested steps of “CAN manual”.

For me, the participation in the Counterandalternativenarrativesagainstislamophobia project held in London from 13 to 22 November 2019 was not only an amazing opportunity to meet young, intelligent people from Greece, Italy, Germany, England, Turkey and Croatia, but also a chance to have a closer look at the situation in their countries and the problems they face in relation to Islamophobia, radicalization of the young and hate speech. The discussions we had on the relevant topics were extremely rewarding, as were the experiences exchanged and new ideas emerged. We have also been able to get acquainted with the ways in which we, the young people, can help in order to reduce these problems on local and national level.