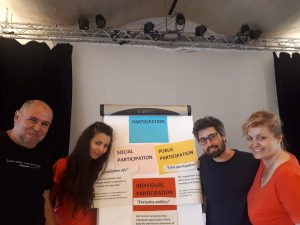 For the period of 27 July to 4 August I participated in the TC E+ Youth-Activizenship training in Rovereto. Italy. The training started with detailed introduction session from each member of the team and all participants from Greece, Spain, Romania, Italy, Bulgaria, Hungary, Lithuania, which was not only fun but a great chance to know everyone in detail. With many of them I will keep our contacts and we will work on a different projects in the future.

Also during the training I got a chance to participate in Elections in Perfectville, a role-playing simulation game developed by the organizing team.

The setting is a village with elections for the local council, and players take the roles of politicians, election observers, local authorities, citizens and migrants, and an NGO.

For the day we all got to enter this micro world in which time and space are compressed—an entire village fits into one room, and 2 months go by in the span of about 3 hours.  And I get to be a different person, an election observer.

My job was to contribute to an effective elections for the new city council of Perfectville, working with all the other players whose own decisions affected the context in which we worked.  The game is supposed to create a “hybrid learning environment”:

1) learning the ‘content’ – in this case about different political moves in an election campaign;

2) learning about ‘relational social processes’ – how to interact and collaborate with other players.

The game uses a quantitative system dynamics model, combining environmental variables with decisions made by the players to produce a social-political system with many feedback loops.  Besides the game itself, the learning environment I found myself immersed in contained a few additional layers:

As I walked home from the event, I realized it had been a while since I’d been so absorbed in something for an entire day in the way the game absorbed me.  During the game and debriefing, I learned in much more intense way (getting emotionally involved) than I would have from a traditional class on political elections and active citizenship and campaigning.