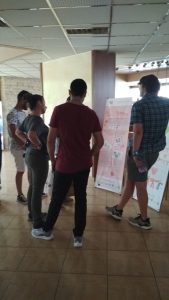 The Anti-Discrimination Campaign under Story_S – Springboard to Roma Youth Success was presented at the Annual Meeting of the National Network for Children in Hisarya, Bulgaria. The main goal of the project as well as the idea behind the posters, which attracted the attention of youth, were told. The young people also participated in a citizenship incubator during which non-formal methods discussed the types of discrimination, as they went into depth about one based on ethnic differences. The participants gave personal examples how stereotypes can influence people’s behavior and how we can prevent discrimination.