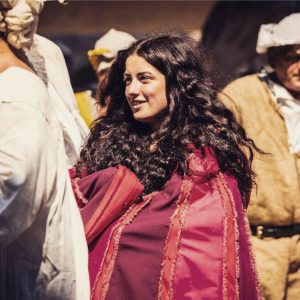 I’m Stella Bastianelli, I was born in a small village called Bevagna in Umbria (the “green heart” of Italy). Bevagna (Mevania in latin means “in the middle”) is very beautiful and even if it’s a little village was very important during Roman Empire. The city was in fact the first river-port of central Italy and it was (and it’s) crossed by the famous “Via Flaminia”.

After attending high school in science I realized that math or chemistry were not for me and I enrolled in the faculty of Political Science and International Relations in Perugia. I graduated last November and I wrote my thesis on “Sociology of Deviance” focusing my attention on the Italian prison situation. The degree course in Political Sciences opened my mind a lot and gave rise to many many interests in me. In these years I have particularly studied subjects such as economics, history and sociology. Through these studies and reading a lot of books, I became passionate about the history and geopolitics of the Balkan countries. When the opportunity to do an internship in Bulgaria came up, I made sure I could leave. When I discovered that the internship would be at the Bulgarian Youth Forum, a place where, finally, I could have put my studies (only theoretical) into practice, I finally understood that I had to leave. I chose to come here especially to discover a reality that is, most of times, inaccessible and unknown in Italy, a reality that I consider “the real reality”.

I mean that the reality of ethnic, religious, immigrant minorities (and of all those who then become de facto the excluded of society), most of the times it’s seen and interpreted by outside, only beyond a television or media screen.

The chance to be in-side of all of this it’s very, very important for me. This is why I decided to come here, in the Bulgarian Youth Forum. In short words, I want to discover and test myself!

My passions are art, drawing, theater and dance and I hope I can use them to create activities useful for this experience!