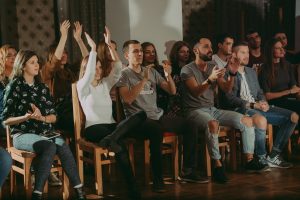 The project “#NoMad(E+)” took place between 22-30.11.2018 in Horezu, Romania, including participants from 7 countries – Romania, Bulgaria, Spain, Italy, Turkey, Lithuania and Croatia. It was written by young people from 7 partner organizations, following personal cuts with violence, radical views and inter-religious confessions. The young people in the project writing team knew about and debated the first stage of the needs at the base of which they left. They identified  the needs in three levels:

1. Locally
– Young people in the local community had no key competences and were not tolerant of other young people.
– The young people had a low level of knowledge of the human rights and liberties.
– A small number of young people took part in the Erasmus+ projects.
2. At the level of NGOs:
– NGOs had little visibility before this project.
– Restricted number of volunteers / young people.
– Poorly represented operationally.
3. At the level of young participants:
– Young people did not know their rights and abilities.
– They were not tolerant and had stereotypes about other nations/ethnicities.
– Did not use non-formal education methods.
– They were marginalized and felt excluded.
– They did not trust their own forces. 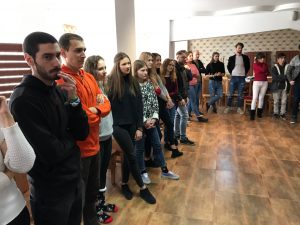 Through the activities we have achieved our objectives set at the beginning of the project:
1. 44 young people from the 7 countries of the program were acquainted with human rights knowledge, backgrounds and freedoms as a result of mobility in Horezu, Romania.
2. As a result of the project, 44 young people have developed their artistic skills in film, acting, creation, music and have sent positive messages to young people in their local communities.
3. Following the project, 44 young people developed their feelings of active European citizenship, interculturality, solidarity and international promotion of human rights through different non-formal education methods.
4. Increasing the international attractiveness and visibility of the 7 partner organizations through cooperation and the realization of films that promoted human rights among adolescents.
Participant selection was made by each partner for their youth country team in the organization.
The selection procedure of the participants was the following:
1. After receiving the approval response and the infopack, the partners placed the selection announcement
2. Send the application form to those interested
3. Applications of young people in the organization/community
4. Skype interview with SO.
5 Evaluation of participants.
6. Final selection of participants.
7. The participants who were approved were announced and we had the waiting list.
8. Each SO has made a reserve list (3-4 persons) in case of emergency.
9. Selected youth confirmed participation.
Profile of participants (PP):
– Age between 18 and 30 years old.
– Creative, passionate art: music, theater, film with or without artistic experience.
– Need to develop artistic skills in different areas.
– I encouraged the SO to select young people who have never participated in the Erasmus+ projects.
– Participation of young people with fewer opportunities was encouraged. 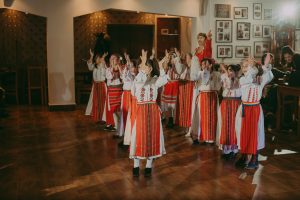 According to the ASK methods following the non-formal education methods developed, the young participants gained:
1. Attitudes.
– Increasing self-confidence.
– Reaction to human rights.
– Responsibility and relationship between different groups of young people.
2. Skills – Skills
– Developing leadership, concentration, attention and logical thinking skills.
– Develop human rights reactivity skills.
– Improve communication in English.
3. Knowledge – Knowledge:
– I know the types of education methods, some of the non-formal education methods and the Erasmus+ program information.
– They discovered new non-formal methods.
– They have acquired new knowledge about other cultures.
The impact of the project was divided into:
1. Impact on participants
– 44 young people who have participated in this mobility know about fundamental rights and freedoms
– They have developed their knowledge and know new ways of promoting human rights
– The 24 young people with opportunities have become more integrated into the community
– They have developed their artistic abilities in making #No Mad (E +)
2. Impact on participating NGOs
– The visibility of partner NGOs has increased both in the community and in the region.
– The 7 partner organizations have developed their logistical and operational capabilities.
– The members of the partner NGOs have acquired and acquired new skills in working with young people.
– Organizations have know-how in working with young people about non-formal education methods.
– The organizations involved young people with limited opportunities, which in turn disseminated in the local community through live communication.