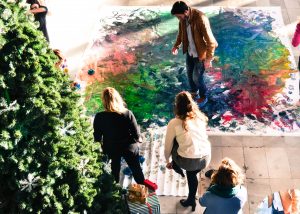 On 9th December 2017, BYF volunteer Biljana Hristovska implemented her idea of a workshop “Painting With Feet“. The workshop was in cooperation with Ralitsa Sofronieva from Irish dance club “Celtic Phoenix”. The idea was simple – just dance (and paint)! People were given plastic shoe covers and full freedom to express themselves. It was different from anything anyone there had tried before, which made many people gather around, wanting to join for a dance or two.

It was a fun experience for everybody involved in the activity. The workshop was part of a charity event hosted by T.R.A.P. (Trotoara Room for Angry People). The feedback from the participants was amazing and we will definitely make more workshops like this one in order to make at least one person strive further than they thought they ever could. As Ossie Davis has once said, “Any form of art is a form of power; it has impact, it can affect change – it can not only move us, it makes us move.”