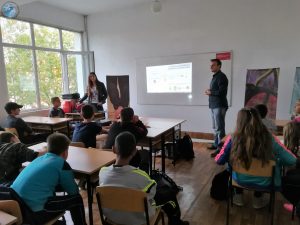 As part of the project “Live Actively” a series of lectures were conducted on 20.09.2017 in the Vocational School of  Veterinary Medicine and Agriculture “St. Georgi Pobedonosets” (Kostinbrod). The topic of the lectures focused on addiction such as cigarettes, alcoholism, narcotics, gambling and some common ones of the modern way of living, such as the Internet addiction. Students from the school were able to experience throughout role plays and interactive workshops the bad effects of the dependencies. This program which is an initiative of the Bulgarian Youth Forum and the Municipality of Kostinbrod (funded by the Ministry of Youth and Sports) is not only informing young people about the bad effects of the threats in modern living,  but as well is teaching them on the prevention as well.